The courtcase of E, who is accused of pieing a politician in norway will most likely be the 7th of july. The following is a letter from E from the jail that we received.

The window might be open, but there are still bars
The people look just like me and you, but they are still guards
The bed may be comfortable but the night is still hard
The faces may be smiling, but there are still scars
The trees may be visible, but there are fences in between
The work may be easy, but to refuse means not much to eat
This place may not be torture, but it is prison nonetheless
But whilst nobody down here is free
The birds still fly overhead.

I’m sitting on my bed, on my 3rd night in Bredtveit prison for women in Oslo. I’m still getting used to the fact that I’m here, sometimes I stop what I’m doing and feel a bit shocked to see that I’m locked in a room or unable to make whatever choice I want to, it’s a very weird feeling. I’m doing ok, I have been thinking that this day will come at some point and it is much easier to feel strong when you prepare as much as you can. Of course, nothing fully prepares a person for prison. Many people said that if you’re gonna go to prison then Norway is one of the best places. I can see why people think this. I keep reminding myself and them that a ‘nice’ prison is still a prison, still a cage. They agree — it’s important to not let reformist attitudes substitute real liberation and destruction of hierarchies but I can totally see that to a lot of people here, this place is a much better deal than somewhere else, in Germany, Russia, Belarus, England… So it’s strange to try and put all my feelings together in one piece. There’s a poem here that kinda tries sum up how I am thinking. But aside from this, I am doing ok. I’m focusing on reading, getting fit and actually brushing my teeth haha; I will happily exploit their facilities for my own gain (I better have rock hard abs by the time I leave).

A lot of people here have heard what happened on the radio or the news, and for these first few days I kept getting asked questions about it, but I think generally people find it ridiculous that I’m in prison because of this. Realising how big this story is in Norway, or at least in Oslo right now.
Its fun to see how this whole thing shook up the passive, submissive society enough to see that their routine of monotony, their highly self-policing structures and their weak cries of democracy and assimilation into the techno-industrial capitalist order can still be challenged.

Someone said to me on my first day here that it is good to come to a woman’s prison if you’re a feminist. That interested me, firstly because I haven’t yet found a reason or the ability to come out as non-binary trans to anyone. I think I’m too shy and I haven’t found anyone I trust to understand and feel safe telling them. It’s not important that people know that I’m not a woman. I know it and that is enough. But it means I don’t necessarily relate to people in that way. However, we all seem to share a unanimous mistrust, hatred or lack of interest in the plight of cis men, and that seems to be a very uniting thing. There is a lot of gossip and some rivalry but more intensely is the support and deeper, more serious understanding that these people have of each other (or just from what I’ve seen and been part of so far) through standing together against the wrath of the men in their lives who for more people than not, seem to be the reason for their imprisonment. So that’s something that I would like to talk to people about these thoughts. So far I’m getting along well with some women here and I can see myself making friends, but also being socially anxious and genrally a nihilistic introvert means I’m struggling on some social levels haha. But I’m already finding that sometimes it’s necessary to take a step back from having a harsh critique ready at every moment, when you just need to laugh at the ridiculousness of the situation. I know I’m not here for long, but I think without the silliness and laughter that these women offer, I would have a much harder time. I would really like to get to know some people, I hope I do.

I wanna apologize to all the peeps looking forward to seeing us play at Blitz on Thursday and possibly in Vienna next month. I don’t know what R has up their sleeve but I’d like to ask everyone to support them as much as they need it. The prison industrial complex affects everyone involved, not just those inside.

Also, I haven’t had a chance yet to talk to my family because of limited calling time, so if people can pass on messages of support through the Cistem Failure bandpage on Facebook, this would be amazing. I know that for us, the reality of prison has to be normalised so that we can keep going, but not everyone around is so prepared to be confronted with these shitty and scary situations, and it’s important that we can make each other’s experiences easier through support. Dad + James, I will call as soon as I can!

Also a huge thanks to the friends around here, for putting a lot of effort already into solidarity stuff, as well as becoming good mates with the lawyers, who I think really like you lot ☺ It sucks not being able to see Norway in the end, but I hope that you peeps still get to see those plans through. I would probably get quite down if such lovely and mischievous comrades and buddies weren’t on the other side of these fences, so thanks a bunch.

There’s a bunch more things that I could say, but it’s late and the weird light in the room makes it a strange sleeping pattern. But I hope this was a nice update for people, and if anyone feels like writing letters, then I think they would be better sent to our friends from Hambach Forest, as well as comrades all over the world suffering at the hands of an increasingly more repressive state. I like letters but I will be out soon — a lot of our friends are facing more time and harder struggles, do so let’s keep each other’s spirits high and our fires burning, that’s the best thing for now.

Thinking of all the lovely people and I can’t wait to be out on the road again, on the other side of this fence!! 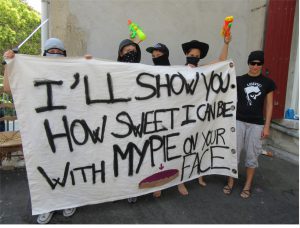