We have had a great time in paris, and are on a bus now taking us to rennes, to get to st. Cadou a tiny tiny town where we will be playing in a cool cooperative.

we played a great show at the CNT offices in Paris and helped to raise a bunch on money for a squat and for calais migrants. We were quite impressed with how well it was organised, there where lots of cool books, but sadly enough for us most of them were in french, and really good food. we are making an effort to introduce our songs in french, i do not really know if this is working well, but if not i guess it would be a funny sight.

Climbing over barriers to get to the metro, busk there, eat baguettes. We even went to see some cool historic stuff. This is the place where the paris commune happened. where working class peeps took control of paris, and ruled there with their own revolutionary government(?). After 5 months they all got brutually murdered, but still. the french peeps murdered their own king. just imagining that happening nowadays, going to the house of bill gates, or some monarch, loot the place, torch some stuff. take control of amsterdam, declare it autonomous.

In other news, apart from a shit ton of zines, badges, cds, and handmade menstrual pads we got about 40 speculums the other day to add to our distro, which is getting quite heavy. Some of us where inspired about this zine that talks about self examination and genitals and stuff. Speculums are these things that peeps use to open your cervix so you can find lost items in your vagina, or to have a look about, and get more in touch with your body. So headtorches and mirrors at the ready! you can get one now if you go to any of our upcomming shows. We have four different sizes!

Also we have so pretty cool anouncements to make, and some really fucking cool stuff is going to happen in the future, we might play some festivals, and we might be playing with some bands that we really really like:

Like Appalachian terror unit, the first of may at the cowley club
and with days n daze the 18th of august in Bambara groningen.
this is all for now as we do not want to reveal everything just yet. We are planning future tours and lots of cool stuff!

Lastly, we have had a few changes in the band in the last weeks, and because of some difficult internal stuff that we as a group have to work out, at the moment we are just travelling with the two of us on banjo and our wonderful friend managing the distro. This situation was shitty for everyone and it leaves us thinking about our behaviours and socialisations that are formed over years of living in a capitalistic, patriarchal society. We need to support each other in challenging and being critical of our actions, as we have to smash the destructive elements of this world in our heads before we can build anything constructive for each other. So yeah,thats been on our minds a lot recently, and we hope that we can find some solutions.

Posted in General | Comments Off on Touring, Speculums, baguettes!

So we are a little bit of the way through our tour, and we’re having a lot of fun! So far we have played in Joe’s Garage and Bajesdorp in Amsterdam, The Office in Utrecht, Wagonplatz in Groeningan and tonight at Pinos, also in Groeningan. Every show has been sweet, lots of people dancing and shouting our words back to us so that has been really fuckin cool, thanks everyone for feeding us, giving us a place to sleep and generally being really amazing for keeping these spaces active and political.

We have a better overview of the rest of the tour, so here are our official dates, and we will try to keep peeps updated with our last minute/secret shows

We are still potentially looking for shows around these places so if anyone feels like having us play in their space, give us a shout at cistemfailure@riseup.net.

Posted in General | Comments Off on We like the tour!

we are planning a biggass tour in mainland europe, we still have some dates to fill, so if you feel like helping
out that will be very much appreciated. also, we would love to hang out, we will be travelling with some cool zines and cds and all of that. we even made badges.

after this we will go down to spain, girona, barcelona, vila nova, end goal: Malaga. Dates for this will come over time!

check out our music! cistemfailure.bandcamp.com

PETROL GIRLS – Raging and unapologetic feminist post-hardcore from London, catch these people whilst you can as they are making a pretty good name for themselves. Their set is sick, it will change your life for sure

CISTEM FAILURE – Anarcha feminist folk punk queers from all over the place, fighting the cisheteropatriarchy one banjo at a time…

The Cowley Club is a social centre built on anarchist principles, which opposes authoritarianism and oppression in all forms, and exists to promote solidarity and co-operation.

It’s easy to be affected by the messed up society in which we all live and it is the responsibility of us all to challenge oppressive behaviours in ourselves, such as: *Racism *Sexism *Homophobia *Transphobia

The following behaviours will not be tolerated in the Club: *Sexual assault, sexual harassment and unwanted touching *Physical violence (except in self defence) *Verbal harassment and threats

Title: Cistem Failure + More TBC
Location: Random Camel Housing Cooperative, Ipswich, UK
Link out: Click here
Description: Cistem Failure are bringing their rowdy political banjo folk-punk to town!! And you’re all invited to join us for the first gig of the year at the house of the Random Camel in the centre of Ipswich.

Posted in General | Comments Off on Cistem Failure + More TBC

Momma Swift/Rover Split CD is out in the world!

so we thought we would bring out a little split EP whilst we’re waiting to finish up our album, you can find it here http://roverrr.bandcamp.com/album/stuck-together , share with ur friends!

also we want to say a huge thanks to the people in Groningen, Utrecht, Amsterdam, Aachen and Wuppertal in the Netherlands and Germany for putting us up and letting us play some really sweet shows in ur squats and social centres, we had a great time seeing what amazin things people are up to. Heres a pic from our show at the Azed (not sure of the spelling…) in Wuppertal where they were having a benefit for the Hambach Forest 3. 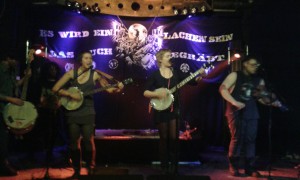 we also are in the beginning stages of planning a tour, we have dates to fill in the UK, Netherlands, Belgium, France, Catalunya and Spain, so if anyone feels like having us around give us a message! also if you feel like driving a bunch of smelly loud peeps around for 2 months then let us know, otherwise it might turn out to be a complete mess…

so keep eyes open in the next month for exciting new developments!

Posted in General | Comments Off on Momma Swift/Rover Split CD is out in the world!

This song is written for the Hambach forest 3 that are locked up in Germany for defending the hambach forest.
A forest occupation that tries to resist RWE a evil energy company that is cutting down the forest to extend there superduper big browncoal mine.

Cistemfailure, at the cowley club in brighton, after eating great great vegan food we played some songs, result is this!

Thnx everyone at the Vegan fry up for a great day! Keep up the good work!